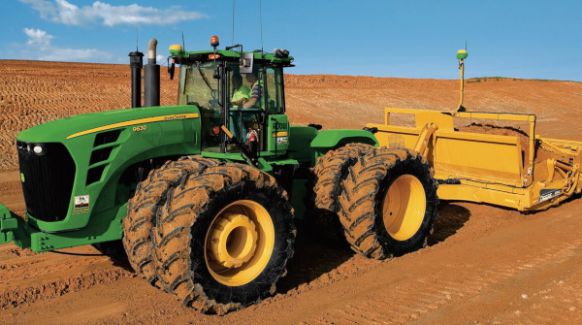 Fields with asterisks* are required. Please email our helpful staff with any questions or comments using the contact form.

Send to a friend

Send To A Friend

Fields with asterisks* are required. Your friend will receive an email that contains a reference to this page. Please send this email only to people you know who would be interested in this information.

Leave the frustrations of a laser system’s setup and maximum operating range behind. iGrade™ leveling system is a global positioning system (GPS) based water management system that can be used up to 2 km (1.2 miles) from an RTK base station.

iGrade’s performance is not affected by factors that traditionally impact lasers such as dust, wind, and operating at night. This allows more work to be done without the hassle of moving base stations or waiting for outside conditions to improve.

iGrade is not intended for precise, finish-grading applications. While users may experience sub-inch grading performance, environmental variations could cause vertical accuracy to vary up to +/- 5 cm (2 in.) from pass to pass. Click here to learn more about StarFire receiver vertical accuracy.

iGrade teams up with the Application Controller to constantly keep the scraper on grade, allowing the operator to spend more time focusing on the machinery and task.

Utilize many of the same John Deere components already owned

An iGrade™ leveling system activation works with many of the different John Deere Ag Management Solutions (AMS) components that producers may already own such as:

iGrade is approved for the following platforms:

iGrade requires the receiver to have an RTK signal level. iGrade does not support WAAS, EGNOS, SF1, SF2, or SF3 signal levels.

The John Deere Application Controller is required for iGrade activation.

Cut-fill maps allow producers to create desired contours by moving the least amount of earth. Cut-fill maps provide best-fit or multi-fit plane designs. Beyond land leveling, this solution can be used for infrastructure design of surface drainage, contours, and terraces.

Vertical accuracy can be impacted by signal interference that the StarFire 3000 Receiver is susceptible to, such as multipath. The iGrade antenna resists signal interference, allowing for the rejection of error that can typically be caused by multipath effects. It is compatible with global positioning system (GPS) offering L1, L2, and L5 satellite signals and Russian satellite constellation (GLONASS) offering G1 and G2 satellite signals, as well as the StarFire network (L-band), making it an excellent enhancement to the StarFire 3000 Receiver.

The iGrade antenna is only necessary for iGrade users demanding the highest possible vertical accuracy for their applications and should not be installed on the following:

The iGrade antenna is only compatible with StarFire 3000 receivers and is only intended for use on the implement receiver utilizing iGrade or other earthmoving applications. The StarFire 3000 Receiver must remain mounted to the same implement as the iGrade antenna being utilized. Use of the iGrade StarFire GNSS antenna in any other manner is neither permitted nor supported and can degrade desired performance of the paired receiver.

The iGrade antenna is recommended for commercial and high-use operators of iGrade using StarFire 3000 Receivers. Use of the iGrade antenna generally improves performance when experiencing conditions described above, but does not guarantee sub-inch grading accuracy.

This document lists all the compatible equipment approved with the software update 19-2 release, and is subject to change with newer software updates. To ensure complete and proper compatibility, the most current version of implement control unit software, Generation 4 Display software, or compatible farm management information software (FMIS) should be used. Non-current software versions will require an update before support can be provided. Unapproved software version configurations will not be supported.

Server serial numbers are as follows:

Sorry, currently there are no specs but check back with us later.

We carry a full selection of maintenance and repair parts for agricultural, lawn & garden, and commercial equipment.

Gay Implement is dedicated and here to serve you. Our staff includes some of the most knowledgeable professionals in the business.

With 60 years of combined sales experience, our sales team is dedicated to making sure that our customers purchase the right equipment at the right price

We carry a full selection of maintenance and repair parts for agricultural, lawn & garden, and commercial equipment.

Gay Implement is dedicated and here to serve you. Our staff includes some of the most knowledgeable professionals in the business.

With 60 years of combined sales experience, our sales team is dedicated to making sure that our customers purchase the right equipment at the right price

Let us help you get moving.